Parution de l'ouvrage "Reimagining Psychiatric Epidemiology in a Global Frame. Toward a Social and Conceptual History" 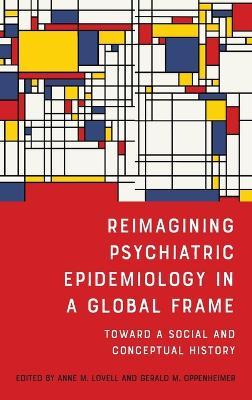 Examines psychiatric epidemiology's unique evolution, conceptually and socially, within and between diverse regions and cultures, underscoring its growing influence on the biopolitics of nations and worldwide health campaigns.
Psychiatric epidemiology, like the epidemiology of cancer, heart disease, or AIDS, contributes increasingly to shaping the biopolitics of nations and worldwide health campaigns. Despite the field's importance, this is the first volume of historical scholarship addressing psychiatric epidemiology. It seeks to comprehensively trace the development of the discipline and the mobilization of its constructs, methods, and tools to further social ends. It is through this double lens—conceptual and social—that it envisions the history of psychiatric epidemiology. Furthermore, its chapters constitute elements for that history as a global phenomenon, formed by multiple approaches. Those numerous historical paths have not resulted in a uniform disciplinary field based on a common paradigm, as happened arguably in the epidemiology of cardiovascular disease and cancer, but in a plurality of psychiatric epidemiologies driven by different intellectual questions, political strategies, reformist ideals, national cultures, colonial experiences, international influences, and social control objectives. When examined together, the chapters depict an uneven global development of epidemiologies formed within distinct political-cultural regions but influenced by the transnational circulation and selective uptake of concepts, techniques, and expertise. These moved through multidirectional pathways between and within the Global North and South. Authored by historians, anthropologists, and psychiatrists, chapters trace this complex history, focusing on Brazil, Nigeria, Senegal, India, Taiwan, Japan, the United Kingdom, the United States and Canada, as well as multicountry networks.